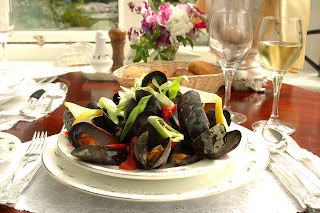 Ingredients: (Serves 6-8)
For the cured salmon: 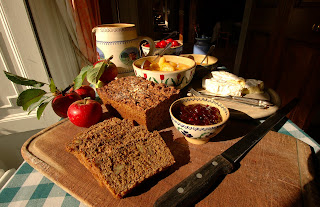 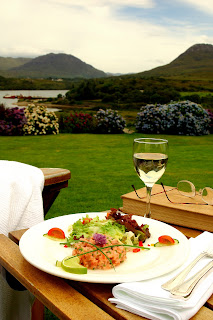 Happy cooking and La Fheile Padraig Shona from all at Irelands Blue Book.

Posted by About Ireland's Blue Book at 03:13 No comments:

Rathmullan House stands on the edge of the village and port of Rathmullan, Co Donegal. This year the house celebrates 50 years in business as one of Ireland's leading country house hotels. Let us take a journey through the history of Rathmullan house to the present day. 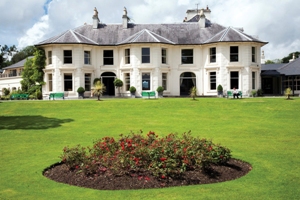 A Sense of History

The man who built Rathmullan House in around 1820 was Andrew Knox, a prominent landowner and MP whose principal residence was the fine Prehen House outside Derry. The building was initially called The Lodge, and was a summer retreat for Andrew, his wife Mary and younger members of their family of ten children.
The Knoxes were already long established in the Rathmullan area, going all the way back to 1612. They were very much part of the Irish landed gentry - Andrew was described as “the most extensive landowner in the parish” in the Ordnance Survey papers of 1834.
The family had a storied past. Bishop Andrew Knox, a Scot, arrived as part of the Plantation of Ulster around 1612. He was of the same family as John Knox, who founded the Presbyterian Church of Scotland half a century before.
Bishop Knox was granted the ‘Friars’ lands’ in Rathmullan (King James I also appointed 25 horsemen and 15 soldiers to help him hold on to them). The Bishop lived in a fortified house within the old Priory, now Rathmullan’s most notable ruin. Fortified, of course, because this was still the wild North West.

‘May you live in interesting times’ can be a blessing or a curse, and it’s certainly the tale of the Knoxes down the generations. Bishop Knox was in the vanguard of the Plantation; his son Andrew lived through the 1641 Rebellion, when the Priory came under attack; and the next Andrew was an army major within the walls of Derry during the famous siege of 1688/89.

Hanged MacNaghten
Perhaps George Knox, born around 1660, had an uneventful life, but his son Andrew – grandfather of the first owner of Rathmullan House - was caught up in one of the most sensational events of the next century. The tale of ‘Half-Hanged MacNaghten’ is still dusted down regularly today, and was recently the subject of a book.
Andrew, a long-serving MP for Donegal,  married Honoria Tomkins and they lived in the Priory in Rathmullan before moving to Derry around the mid-1700s when she inherited Prehen House. Andrew gave hospitality at Prehen to an old friend down on his luck, the celebrated gambler and bon viveur John MacNaghten. However, the relationship turned sour when MacNaghten wanted Andrew’s young daughter Mary-Anne to be his wife. After various twists and turns, the entire affair ended in tragedy in 1761 when MacNaghten ambushed the Knox family carriage on its way to Dublin, and Mary-Anne was killed.

MacNaghten was sentenced to death, despite having considerable public sympathy, but at the gallows in Strabane the rope broke three times. This entitled him to escape execution, but he said he didn’t want to be known as ‘Half-Hanged McNaghten’ and died at the fourth attempt. Of course, ‘Half-Hanged MacNaghten’ is what he’s been called ever since.
The oldest tablet in the church in Rathmullan commemorates the death of Andrew Knox in 1774 and also the loss of his only daughter Mary-Anne – ‘Mariana filia obiit November 1761’.
Andrew and Honoria had one other child, George. It was George’s son Andrew, nephew of the ill-fated Mary-Anne, who built Rathmullan House (perhaps it was to have an escape from the ghost of MacNaghten, which was naturally said to haunt Prehen House).
Andrew and his wife Mary were part of that intricate mix of relations and connections which made up the Irish gentry. Andrew’s mother was Jane Mahon, one of the Pakenham Mahon’s of the remarkable Strokestown Park House in County Roscommon, and sister of Lord Hartland. Mary herself was one of the well-to-do McCauslands from Daisy Hill, near Limavady.
Andrew played a prominent part in the life of the landlord class in Donegal, serving as MP and as a lieutenant-colonel in the Donegal Militia.

The Batts arrive
The Knoxes maintained The Lodge as their summer retreat until the mid 1830s, by which time their children were long grown up. And so in 1836 Rathmullan House, as it became known, got a new owner - Thomas Batt from 4 Donegall Place in Belfast. His wife Charlotte was also originally Knox, a distant relative of those in Rathmullan.
Thomas was from one of Belfast’s most prominent business families, founders of the Belfast bank and owners of Purdysburn House (later the hospital). They also gave their name to Batt’s Mountain in the Mournes. This Irish branch of the family, originally Cornish, seems to have come from the New Ross area of Wexford, and indeed Wexford and Waterford both have a ‘Batt Street’.
In the nature of things, the family of Thomas’s wife Charlotte was also well-connected. One of her uncles was the Earl of Ranfurly, another was a major general, and her father and two other uncles were prominent clergymen. Her brothers-in-law included the chairman of Dunville’s Whiskey firm in Belfast, William Dunville.
Thomas and Charlotte outdid the previous owners and had twelve of a family. Thomas was active in local church affairs and was chairman of the Vestry in 1840. He died in 1857, and is remembered in a pretty stained glass window in the local Church of Ireland.
It seems his son, also Thomas, took over the estate. He carried out a major renovation of the house in 1870, which doubled it in size and added the three distinctive bay windows with wide overhanging eaves. He died in 1897.
Records show that in 1876 Thomas Batt was one of the bigger landowners in Donegal, with 4,377 acres. However, times were changing. Land reform was heralding the beginning of the end for the landlord class. The Batt estate was transferred to tenant ownership in 1902.

A bracing walk
Members of the Batt family stayed on in Rathmullan House until just before the Second World War. The house was put up for sale in 1939. An auction of house contents was held, and Philadelphia millionaire and art collector Henry P. McIlhenny got many items for Glenveagh Castle, which he had recently bought.
A Batt relative, G.O. Batt, writing from London in August 1939, commented, “Lovely Rathmullan House – it is very sad for me to think that it has all gone out of the family with all its memories and I do not know yet what exactly may become of it.”
In fact, Rathmullan House was to turn rather spartan. The new owners were the Holiday Fellowship, a walking group founded by the Rev T.A. Leonard in England in 1913. It seems he embraced walking as an alternative to what his young parishioners were getting up to on their annual holidays in Blackpool.
His walking holidays proved popular, and over the years the Holiday Fellowship bought a series of hotels and guest houses. Rathmullan House was a new location. Visitors got as far as Derry, then by train and later double decker bus to Fahan, and finally across Lough Swilly on the ferry.
From accounts of Holiday Fellowship guesthouses elsewhere in those days, it was all very organised. Packed lunches were provided with the clear instruction that “lunch rucksacks will be carried by the men.”  Notices announced that, on excursions, “gentlemen will leave the party for a short time after lunch to allow both sexes to attend to the needs of nature.”
There was entertainment in the evenings, including ‘sing-songs’, discussions, lectures and a home-grown concert on the last night. Upstairs in Rathmullan House was converted into dormitories with rows of sinks for muddy boots, and the electricity generator was turned off at 8pm to encourage an early start in the mornings.
The Holiday Fellowship, now known as HF, is still operating, but on a more luxurious level these days. It has 18 “fine Country House hotels” in England, Scotland and Wales.
During the war years, Rathmullan House was also used as a base by the Irish army reserve, the Local Defence Force.

The Wheelers
The current owners, the Wheeler family, come into the picture around 1962. Bob Wheeler was brought up in  London of Irish parents and spent a lot of time on family holidays in Marble Hill, near Dunfanaghy. Later his mother bought Cloghan Lodge outside Ballybofey.
Although Bob trained as an interior designer, he found himself drawn to the hotel industry, not least because of his time helping out the legendary Mr Bertie Barton in the halycon days of the Portsalon hotel, welcoming leading Dublin families like the Bewleys and the Jacobs.
Bob worked for three years in hotels in Rhodesia, and on his return became a partner in the Milford Hotel in Milford. When Rathmullan House came up for sale, he and his wife Robin put together a consortium and bought it. At that time Seamus, the famous house donkey, was still meeting guests at the pier and collecting their luggage, as well as ploughing the walled garden.
After extensive renovation, Rathmullan House re-opened as a 21-bedroom hotel.
Bob recalls, “We got a very good boost early on because news of our opening was carried on Ulster Television and the wife of the governor of Northern Ireland, Lady Margaret Wakehurst, came to stay. That raised our profile. It also meant we got an all-night telephone service – until Lady Wakehurst arrived it went off at 8pm!”
The Rathmullan House success story was beginning. In 1969 there was an investment programme, including the distinctive ‘tented’ pavilion dining room designed by celebrated architect Liam McCormick.
However, there were clouds on the horizon. Across the border in Northern Ireland, the Troubles began.
“In 1970 it was just a disaster – we had 90% cancellations. We opened for two months in the summer, and in that year we lost more than it cost us to set up the place. But we were rather determined we wouldn’t give up.”

With grit, hard work, a continuing commitment to quality and some imaginative marketing, Rathmullan House survived and began to thrive again. The swimming pool was replaced and a new bedroom wing added in the 1990s.
Bob and Robin have since handed over the reins, although they both continue to take a close interest in the business. Bob’s bailiwick is the gardens. Nowadays Mark and Mary Wheeler are the second generation of the family to welcome visitors to Rathmullan House. 2012 sees them celebrating 50 years of Irish Country House hospitality.


Major changes
In important ways, the history of Rathmullan House charts major developments in the history of Ireland itself – the ascendancy of the landed gentry, the rise of the Ulster business class, the age of land reform and finally new roles for the ‘Big House’, including its re-invention as one of Ireland’s most charming institutions, the country house hotel.
That sense of history, coupled with the continuing tradition of quality, hospitality and elegance, is part of what makes a visit to Rathmullan House a special experience.

Posted by About Ireland's Blue Book at 03:32 No comments: