Golfing in the West of Ireland.

In recent months the eyes of the golfing world have been firmly fixed on Ireland. The reasons for this are numerous.


Firstly the success of Northern Irish born Rory McIlroy at the U.S open “confirmed the arrival of a new sporting hero”, high praise indeed coming from a former champion and another Northern Irish golfing hero, Graeme McDowell.
Next Irish golfing legend Darren Clarke lifted the Claret Jug, having won the British Open Title, at Royal St George’s ending a 20 year wait for the honour.
Next month, Co. Meath will play host to the top ladies of the golfing world as the Solheim Cup gets underway.
Irish landscape lends itself quite naturally to someone of the world’s top courses. We asked Terence McSweeney, former communications director for the PGA of America, and owner, along with wife Frances, of Stella Maris Hotel in County Mayo to give us a few tips as to what he thinks are the best courses in the west of Ireland.


Eddie Hackett, the legendary Irish golf course designer, was reputed to have stated of his final work: “If God ever intended a piece of property to be a golf course, this is it”. Hackett was referring to his magnum opus: Carne Golf Links in Belmullet, Co Mayo.
Carne golf course, located near the town of Belmullet, is the finale of Eddie Hacketts natural links work. Massive sand dunes tower above grassy fairways that have been shaped by nature over thousands of years. Working with such magnificent landscape, Hackett created eighteen totally different holes that were noteworthy for their elevation changes and hidden greens. The finishing work was done by hand, virtually unheard of today. Local volunteers in Belmullet worked diligently with scythes, shovels and other manual instruments to make the magnificent course come alive.
Enniscrone golf course raised the status of its game in 2001 after club leaders received planning permission to move farther into its seaside dunes. Hackett had re-designed the original course in the 1970s, but was not able to utilize most of the dunes that surrounded the course. As a result, most golf was contested over the flat plains that dominated the land leased to the club.
Hackett, who died in 1996, never saw the work of Donald Steel , the British golf course architect  enlisted to add six new challenging holes to the layout. The resulting holes drastically altered Hackett’s original layout, but certainly he would have approved of the even more demanding test of the game with additional elevation changes and seaside holes.
Rosses Point has the oldest pedigree of most golf courses in the West, and has hosted many national championships down through the years, as well as the West of Ireland Amateur Open Championship since 1923. Rory McIlroy won this prestigious championship in 2005 and 2006 before he cast his lot with the professionals. “The Point” was re-designed by the famed Harry S. Colt in the 1920s, providing the foundation for a course that has delighted generations of golfers in the West and Northwest.
Situated on the shore of Sligo Bay, Rosses Point offers panoramic views of some of the most picturesque landscape in Ireland, including the Oyster Island lighthouse.  Like many other links courses of its caliber, Rosses Point offers distinct and severe elevation changes that provide the course with its own inimitable character.
Enniscrone and Rosses Point in Co. Sligo, and Carne in Belmullet, Co. Mayo, form a wonderful trail of links courses for the avid golfer seeking to experience the game as nature intended it to be played.  They are among the great “hidden links” of Ireland.
Stella Maris  Country House Hotel, located in Ballycastle, Co Mayo is the perfect base to enjoy the courses of the West.
For something inland, Glenlo Abbey in Bushypark, Co Galway has a lakeside, 9 hole double green golf course on the property. Before your game, the 10 bay driving range is the best place to warm up. Bill Daly, on-site PGA professional, offers individual and group tuition. Contact Glenlo Abbey for more details.
In the east of the country Rathsallagh House in Dunlavin, Co Wicklow is home to a beautiful 18 hole golf course designed by Christy O’Connor Jnr and Peter McEvoy. Contact Rathsallagh House for more details.
Planning a golfing tour of Ireland? Have a look at Ireland’s Blue Book golf tours and itineraries page.

Posted by About Ireland's Blue Book at 07:05 No comments:

For the Maid of Honour...

For the bride and groom their big day is finally here. Everyone is excited; all the planning is done and everything is arranged.
For you, the maid of honour, the night before is time to do the final check to ensure that, no matter what the wedding throws at you, you have your super hero head on and are ready to swoop in and avoid any impending disasters.
We asked Blue Book houses & hotels wedding co-ordinators:
Gretchen Ridgeway of Barberstown Castle, Co. Kildare, Marie Laffan of Castle Durrow, Co. Laois, Mary Powell  of Cromleach Lodge, Co Sligo and Catherine Lawlor of Rathsallagh House, Co Wicklow for advice on what the maid of honour should keep in her bag on the big day.


So for the maids of honor to be here it is:

The Top 10 List of Maid of Honour tools to avoid wedding calamity!
1. Phone Numbers of groom, groomsmen, bridesmaids, and the parents on both sides.
If there is a delay, longer than what is traditional, in getting the bride to the ceremony call ahead to the one of the wedding party.  The groom is going to be nervous enough as it is!!
2. Tissues.
It is going to be a very emotional day and to avoid "mascara mishaps" ensure you have at least one packet of tissues at the ready.
3. Hairpins.
They don’t take up much room and are essential. If the photos are outdoors a few extra clips might be required to avoid the "windswept look" and keep the brides veil in place.
4. Plasters.
A wedding day is a "new shoe day".  The bridal party will all want to dance the night away at the reception so keep those plasters handy.
5. Mints.
There will be lots of hugs and kisses on the big day. The bride and groom will want to be fresh all day long!
6. Rescue remedy.
That moment when the bride pulls up to the wedding venue can be a daunting one. A few drops or a pastille can help calm and soothe her nerves.


7. Sewing kit.
Just in case! If the dress has a train it is more prone to getting pulled or snagged. A little kit with thread the same colour as the brides dress and also the bridesmaids dresses can save the day! Also, having a few pins at the ready for the groomsmen's flowers is always a good idea.
8. Make up.
Keep just the basics in your bag,  blotting papers to avoid shine and the lippy are enough to have on you.
9. Deodorant/perfume.
A little spritz through the day will keep the bride happy!
10. Your speech.
If you are feeling a little nervous about it, write it down and have it in your bag.
That’s it ladies! A little bit of preparation goes a long way. It’s such a wonderful honour to stand as a bridesmaid with a wonderful friend on her big day. Relax, enjoy it and you will have memories to last a lifetime.
Looking for the ideal venue for your forthcoming party or wedding? A number of the Blue Book Country Houses and Castles and Hotels are available for exclusive use for private house parties and stylish weddings. Romantic views in idyllic places of profound beauty will provide a wonderful location for your special day.

Blue Book gift vouchers, which can be used at any Blue Book property, make the perfect wedding gift. 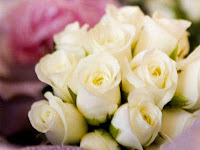 Posted by About Ireland's Blue Book at 03:48 No comments: