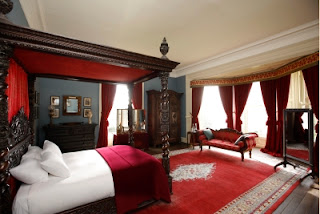 In 1914 Norman Leslie was killed on the battlefield of France but weeks after his death he was seen by Lady Marjorie Leslie beside the chest of drawers in the famous Red Room.

He appeared as if in a cloud of light, reading through some of his letters, as if he was searching for one in particular. Lady Marjorie sat up in bed with a start, and said, `Why Norman - what are you doing here?' He simply turned to her and smiled, then faded away. So did the light.
http://www.irelands-blue-book.ie/houses.html/castle-leslie 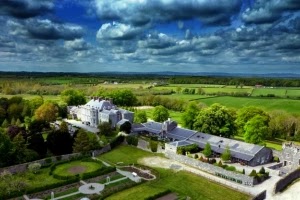 In a field opposite Castle Durrow on the other side of the river stands a monument know locally as the “Obelilsk”.  It is said to mark the spot where a young lady, a follower of the hunt was thrown from her horse and killed.  Remarkable enough though in true Irish traditional style the young lady clad all in white has continued over the years to make occasional brief nocturnal visits to the scene of her fatal accident. 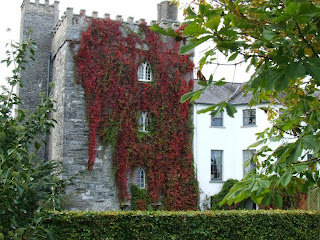 Nicholas Barby built the Castle towards the end of the 13th Century on the land which was originally owned by the Great Norman family the Fitzgeralds.The story goes that for over 700 years people have come to Barberstown Castle, to be both protected and entertained within its walls.  You can take a step back in time and watch the story of Barberstown Castle come alive, hosted by none other than Nicholas Barby.


Medieval banquets are truly haunting with spooky music, wonderful costumes and an authentic insight into local history, teamed with our glowing reputation for good food.  Entertain your guests in the privacy of the original Castle Keep (1288) or in the Elizabethan Room and watch history come alive through Storytelling, Music and Dance.
http://www.irelands-blue-book.ie/houses.html/barberstown 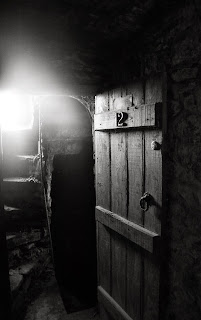 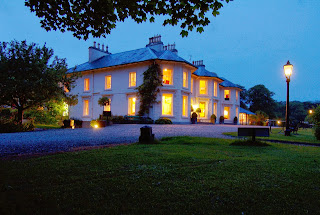 Perhaps George Knox, born around 1660, had an uneventful life, but his son Andrew – grandfather of the first owner of Rathmullan House - was caught up in one of the most sensational events of the next century. The tale of ‘Half-Hanged MacNaghten’ is still dusted down regularly today.


Andrew, a long-serving MP for Donegal,  married Honoria Tomkins and they lived in the Priory in Rathmullan before moving to Derry around the mid-1700s when she inherited Prehen House. Andrew gave hospitality at Prehen to an old friend down on his luck, the celebrated gambler and bon viveur John MacNaghten. However, the relationship turned sour when MacNaghten wanted Andrew’s young daughter Mary-Anne to be his wife. After various twists and turns, the entire affair ended in tragedy in 1761 when MacNaghten ambushed the Knox family carriage on its way to Dublin, and Mary-Anne was killed.


MacNaghten was sentenced to death, despite having considerable public sympathy, but at the gallows in Strabane the rope broke three times. This entitled him to escape execution, but he said he didn’t want to be known as ‘Half-Hanged McNaghten’ and died at the fourth attempt. Of course, ‘Half-Hanged MacNaghten’ is what he’s been called ever since.


The oldest tablet in the church in Rathmullan commemorates the death of Andrew Knox in 1774 and also the loss of his only daughter Mary-Anne – ‘Mariana filia obiit November 1761’.


Andrew and Honoria had one other child, George. It was George’s son Andrew, nephew of the ill-fated Mary-Anne, who built Rathmullan House (perhaps it was to have an escape from the ghost of MacNaghten, which was naturally said to haunt Prehen House).
http://www.irelands-blue-book.ie/houses.html/rathmullan


For more on the Ghostly goings on in Ireland's Blue Book Grand Manors be sure to visit
http://www.irelands-blue-book.ie/halloween-offers.html

Posted by About Ireland's Blue Book at 08:46 No comments: